A few months ago we were greeted on our doorstep by two visitors. One was dead, the other was alive. They were rabbits, and the poor things either escaped from some other homestead or were dumped in our vicinity. Now we have three rather large dogs that don’t take crap from wildlife or any other animal save our cats which they tolerate quite well. It is our conclusion that one or more of our dogs scared or mauled one of the poor rabbits to death and a quick burial was in order. With the burial accomplished I returned to the scene of the crime to discover the second rabbit hiding on our porch behind some plywood. She was obviously very scared, but alive and well. So I scooped her up to save her from a certain death and plopped her into a cat carrier.

We were now faced with a dilemma–get rid of the rabbit somehow or keep her. She was such a cutie that we decided to keep her. That meant I had to spend the rest of the day and well into the night constructing a 7′ X 4′ coop with a little house attached that stood next to the main chicken coop. We moved her in and in no time fell in love with her. We felt sorry that she lost her companion and she certainly did not seem too happy in her tight confines all alone and unable to run around. Compounding this, she got mites in her ears but fortunately we were able to clear that up with some oils. 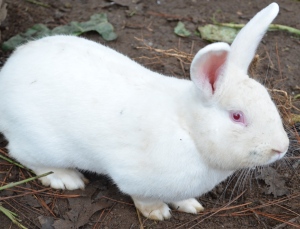 Rosie lived like this for a few months but the dullness in her eyes told me that perhaps I should find a better arrangement for her. Her house as well as the chicken coop sits inside a larger enclosure that is approx. 80′ X 30′ which allows our chickens the opportunity to free range. Initially I was worried about predators that might breach the enclosure and go after Rosie but in the end I opened her door and allowed her access to the outside.

After a few months of this I am happy to report that Rosie is a much happier rabbit. You can see in the photo above the sparkle in her eye. She has also become one of the chicken pack and spends all day hanging around them. When I approach the enclosure the chickens always get so excited and run (more accurately, waddle quickly) to the gate in anticipation of some goodies to eat, and Rosie is right there with them. It’s so great to see an animal run, I’m sure it gives them a greater sense of freedom. Rosie not only runs for joy, sometimes she does a little jump in the air and kicks out her legs to tell us she is really excited. 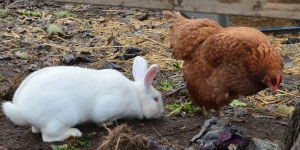 That’s not the end of her story though. She has fallen in love with Gracie the “mother” hen of the brood. She hangs out with her more than anyone else, sometimes I’ve even noticed her settle in for the night right by Gracie. I’m convinced Rosie thinks she is a chicken, after all, what is there to dissuade her otherwise. In the end Rosie’s example has a made me realize that once we kill an animal, that act stands forever and is absolute. We could have killed her and eaten her and that would have been the end–one small meal. To me, Rosie is worth far more alive than dead. She gives me excellent fertilizer for the garden, is cheap to keep and watching such a beautiful animal thrive for endless days gives us tremendous satisfaction.

It’s the start of a brand new year and for me, the restart of a whole new lifestyle. After spending  over two decades in the company of the US Postal Service I decided a year ago that it was time for something new…but what? At 47 years of age with no specialized skills apart from being able to pick a banjo a little, my options were limited. My fiancé who is a nurse happens to own 5 beautiful acres in southern Oregon and one day I looked out over the rolling, tree covered landscape and thought, “Yep, I can do something with this land!” 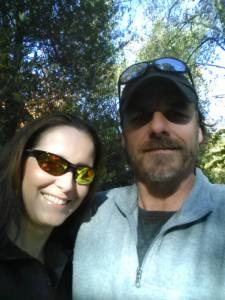 And so the adventure had begun. Visions of cows and chickens and goats and ponds and lots and lots of beautiful vegetables, and thoughts such as “Oh, I can plant garlic over there and start a small gourmet garlic business” raced through my excited mind. One year later, I still can’t get up before 7 in the morning and have realized at least this much: What in the heck have I gotten myself into? Oh, I have managed to get a few things accomplished that I’m mighty proud of, being hopeless and all. A chicken coop in a large enclosure that I built myself, a hoop house, several raised beds for veggies, a pond in progress, over 100 lavender plants in the ground. But everything seems out of focus–as if I don’t have a cohesive plan. With the start of a new year however, I’ve resolved to bring to fruition a semi-functioning homestead, or fraction thereof. I might have to get up before 7 though…what the heck have I gotten myself into?